Launch of the #inLombardia365 project Region Lombardy, Explora – the agency that promotes tourism in Lombardy – and iambassador launch at the International Travel Fair (Bit, Borsa Internazionale del Turismo) in Milan, the engagement program that will involve the major influencers and instagrammers in Italy and abroad. #inLombardia365 will also improve the reputation of Lombardy and its multi-thematic heritage of excellence, comprising the social communities in unique travel experiences on the territory. Ten areas of Lombardy participate with their offer, together with tourism and service operators, to create an experience of shared discovery.

Milan, 11th February 2016 – Explora, Region Lombardy and iambassador have launched at The International Travel Fair (Bit, Borsa Internazionale del Turismo) “#inLombardia365”. For a whole year, the project will introduce travel bloggers, influencers and locals to all the wonders of Lombardy. These prominent “web figures” will be hosted in ten leading tourist areas of the region and they will have the opportunity to experience, without any filters, thematic voyages of discovery.

The ultimate goal is to raise awareness of Lombardy and to increase its tourist flows, connecting the tourism industry and engaging the network through an innovative system of promotion, while creating a model to be studied and also applied in other contexts. To emphasize the heritage of each of the ten areas of Lombardy, both iambassador influencers and Instagrammers were involved. iambassador is the leading network of international travel influencers with a strong presence in many countries around the world, while the Instagrammers are in charge of capturing the best pictures of their experiences in the field. Orazio Spoto, co-founder of the Italian Instagrammers community – national association aimed at the dissemination of Instagram and of mobile photography through events and challenges – will also take part in the project. 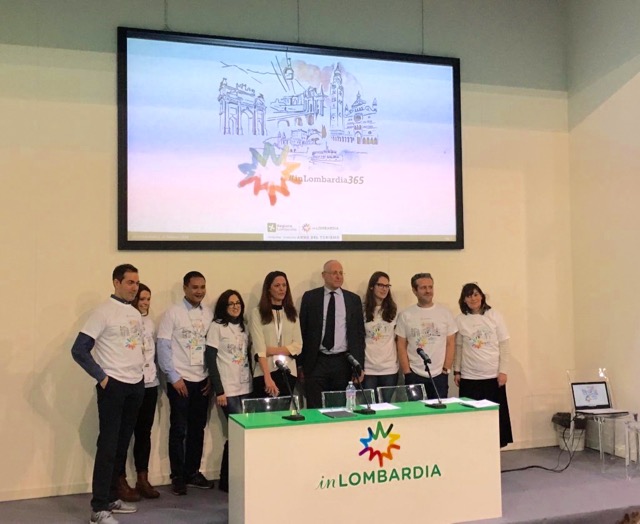 The official launch of #inLombardia365 at the BIT fair in Milan.

“This initiative is the beginning of a trend – said the Councillor for the Economic Development of Region of Lombardy Mauro Parolini – that will bring, for the years to come, the Region of Lombardy to be recognized as one of the leading destinations in Europe. In addition to this, it will also help increasing the number of tourists who will visit our region, representing an interesting case study. I am also sure – continued Parolini – that this collaboration with the territory and the Institutions will be a driving force for the economy of the region during the “Lombardy Tourism Year”.

“We, at iambassador, are very excited to continue our collaboration with the Region of Lombardy after two successful years of influencer campaigns. Lombardy offers a huge range of historic, cultural, natural and gastronomic experiences and we hope to share these experiences with the world”, said Keith Jenkins, CEO of iambassador.

#inLombardia365 does not simply include the intended influencers, but it also opens up to the world of other bloggers and visitors to become a market and a virtual place to exchange opinions, experiences and to post requests. A specific website will be soon launched, a place thanks to which the operators of the territory will be able to interface with the users, indicating availability and services for bloggers and facilitating travel arrangements.

Explora is the first public entity in Italy, managed by Region Lombardy in partnership with the Lombardy Chambers of Commerce, promoting the tourist offer of Lombardy and of Milan, with an innovative format and an inclusive dynamic. Explora is a new agency model that aims to enhance the attractiveness of the Region and its main city through a collaborative development model. Explora is the engine for the economic development of a region which counted 34 million tourists in 2014, over 37 million in 2015 with the aim of increasing them further in 2016, the Lombardy Tourism Year.