BOOM!! That’s what we heard each time Dan (one of our iambassador bloggers) captured yet another perfect shot of the stunning Scottish landscapes. It was soon adopted by the group and quickly became the #Blogmanay catchphrase! BOOM!!

Yesterday, the curtain finally came down on our #Blogmanay campaign and it was an emotional farewell at Gleneagles station for the final group of 8 bloggers. 6 months in the planning, I think none of the co-founders of the campaign – Unique Events, Haggis Adventures and iambassador could have foreseen its success and impact.

It started over a cup of coffee (no beer was required) one day in August in the offices of Haggis Adventures where me, Al from Unique Events and Graeme, Roger from Haggis Adventures were brainstorming about ideas of how we could create a social media campaign to help promote Edinburgh’s Hogmanay when I suggested the idea of an iambassador campaign, inviting some of the world’s top bloggers to help raise awareness of this unique event.

After discussing a few names, Bloggers + Hogmanay= Blogmanay was the catchphrase that popped up in our heads and hence began the epic adventure. After realising the potential of the idea and the scale of the project, we then managed to secure the crucial support and involvement of Festivals Edinburgh, Edinburgh Tourism Action Group, Event Scotland, Visit Scotland and Skyscanner. Without these people, this project would never have seen the daylight.

So what has been the impact of #Blogmanay

Here are some vital stats:

When we sat down to talk about the #Blogmanay campaign and what we could achieve, we all agreed that Scotland has great potential as a winter destination. It’s not just about August. Lots of people were sceptical about the value of inviting bloggers to Scotland in winter. However, given the huge number of visitors that come for Edinburgh’s Hogmanay, capitalising on its popularity and using the event as a gateway to discovering Scotland in winter seemed to be a worthwhile objective. So how did we attempt to reach that objective?

1. #ScotlandHour: The perfect start! A general feature of iambassador campaigns is to conduct a live Q&A session on Twitter which allows readers to ask questions about the trip and also allow the participating bloggers to share their experiences and thoughts in one place. With this being our first ever event specific social media campaign, we realised that we needed to create the buzz in the beginning to help raise awareness and get people involved in the campaign.

This is where #ScotlandHour comes in. #ScotlandHour , the brainchild of Glasgow based travel blogger, Dougie Baird is a 1 hour Twitter Q&A session whereby the online travel community in Scotland meet every month to talk about various aspects of tourism in Scotland. Thanks to the support of Dougie and co-hosts Aileen Lamb , Susan McNaughton and Lesley Judge we created a special #Blogmanay themed session for #ScotlandHour on the 26th December, 2012 that allowed the wider travel community to ‘meet’ the bloggers. We had a very entertaining one-hour chat session whereby the bloggers were given ideas of places to visit, where to eat in Edinburgh during Hogmanay, and also lifting the lid on local Hogmanay traditions like ‘First footing.’

Result: By introducing the bloggers and involving the wider Scottish travel community in the beginning of the campaign we helped create interest in the event and a buzz that was sustained throughout the campaign.

2. The success of the live blogging platform backed up the excellent Social Media support from the Unique Events team. With over 21 bloggers producing multiple types of content, the challenge was to find a way of how best to curate this content and share this real-time across the social media channels. This is where the iambassador team and the social media team of Unique Events team led by the fantastic Colin Fraser came up with the innovative concept of a ‘live blog’ feed using Tumblr and the ability of Storify to create posts using multiple content types. I’ve often seen many destination marketing organisations spend tonnes of of money to invite bloggers and then miss out on the opportunity of not curating their real-time content to help start creating a conversation about their brand as the bloggers are reporting live from the destination. This is where Unique Events and the social media team of Colin Fraser were brilliant, maximising the value of the bloggers real-time content by curating it on their ‘live blog’ and also on their Twitter, Facebook channels.

3. The Scottish weather. Another unsung hero and ‘sponsor’ of the campaign was the Scottish Weather. The weather stayed fair and unusually mild throughout the 12 days the bloggers stayed. Temperatures reached as high as 14C which is unheard of at this time of the year in Scotland. Funny how as the bloggers left yesterday, the temperatures have started to plummet. The unseasonal good weather allowed the bloggers capture some stunning shots of some iconic natural landscapes and national monuments. Which prompted Edinburgh based journalist, Brian Ferguson to tweet

Amazing pic by @budgettraveller717171545454 of Loch Dundreggan in the Highlands today twitter.com/BudgetTravelle… Who says you need to visit in summer? — Brian Ferguson (@brianjaffa) January 3, 2013

4. Visual impact. Even as we publish this post, there’s a tonne of exciting photos, comments and blog posts appearing so we’ll have to wait a few more weeks to assess the full impact of the Blogmanay campaign. One thing is for sure. The visual impact was tremendous. During the Haggis Trip through the Highlands and Skye, and later in St Andrews, the bloggers generated a myriad of stunning images of Scotland’s famed natural scenery. Given that 2013 is the year of Natural Scotland, #Blogmanay was an ideal way to kick off the campaign. On Instagram, the campaign produced 1248 photographs (over-exceeding our target by 120%) producing 29,757 likes and comments and garnering 1.15 million impressions. Take a look at #Blogmanay on Instagram. 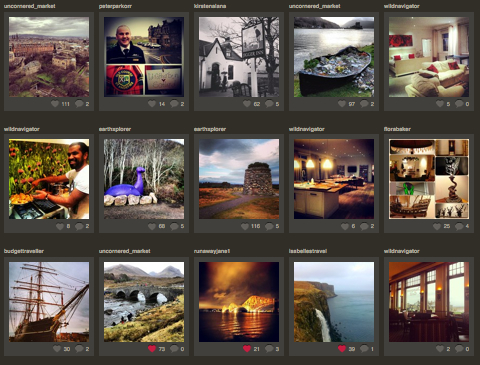 The campaign also produced the most popular picture ever on Visit St Andrews Facebook Page!

The St Andrews sunrise picture taken by Kirsten Alana above gathered 658 likes and over 218 shares, in the process becoming the most liked picture on Visit St Andrews Facebook page, even more than their pictures of Kate and William. Talk about going viral!

While it’s still early days to assess the full impact and legacy of #Blogmanay, it is clear that the social media campaign itself has won over many hearts of locals and tourism operators alike. It also won over the hearts of critical and respected journalists like Edinburgh-based Brian Ferguson, who wrote a fantastic piece about the campaign in his column in the Scotsman newspaper:

I have to confess the bloggers have cast a strange spell over me over the last week. Their enthusiasm and amazement at what unfolded before their eyes is there for all to see on their Twitter profiles.

In the long-term, given the collective will and continued support of all the partners and stakeholders involved in Blogmanay, we hope this turns into an annual event whereby bloggers can continue to unearth the magic of Edinburgh’s Hogmanay and also what Scotland offers as a winter destination.

#blogmanay and #Scotlandhour have made Scottish Tourism sexy for young travellers

You just have to go through the #blogmanay tweets to see how the hashtag has created a focal point online where passionate locals, tourism businesses and travellers from the world have ‘met’, in the process creating a new travel community. Plus it has helped raise awareness of Scotland as a winter destination and also kick off the ‘Year of Natural Scotland’ in style with some
stunning images from all over the country.

iambassador hopes to remain involved with the promotion of Scottish tourism and be able to bring more bloggers from all over the world in the future to discover the beauty and magic of this amazing country.

I’ll finish this piece by thanking the whole team of bloggers involved in this iambassador campaign. Our awe-inspiring iambassador core team – Melvin from Traveldudes, JD from earthXplorer, Audrey and Dan from Uncornered Market, Isabelle from Isabelle’s Travel Guide, Chris from The Aussie Nomad and Mei and Jo from CC Food Travel.

BOOM! It was a true pleasure seeing your work live in action!

Special mention to the UK blogger team whose enthusiasm, passion and dedication made this the most memorable travel campaign I have been involved in: Kate McCulley from Adventurous Kate, Kirsten from Aviators and a Camera, Mike from Fevered Mutterings, Julie from A Lady in London, Peter from Travel Unmasked, Jools from Trains on the Brain, Amanda from A Dangerous Business, Emma from Emma’s Travel Tales, Flora from Flora the Explorer, Mario from Someone Once Told Me, Abhishek from Wild Navigator, Nadine from The Nadwork, Jane from Runaway Jane and last but not least Ana Pilar from TripWolf.

In addition, a big shout out goes to the unsung heroes of the campaign – Special Kay from Haggis Adventures, the Skyscanner team for being an awesome host for the #Blogmanay tweetup, Patrick and Chris from Visit St Andrews, Kate Trussler from the Gleneagles Hotel plus Joanna and Maureen/Mike for hosting us at the stunning Alexander House Hotel.

Now, time to get back to my life as a travel blogger. There’s no rest for the weary….