24 Hours in the UK nominated for World Travel Awards 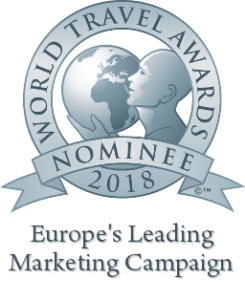 We’re proud and very excited to announce that the ‘24 Hours in the UK‘ campaign, a collaboration between VisitBritain and iambassador, has been nominated for a World Travel Award in the category ‘Europe’s Leading Marketing Campaign’. This innovative campaign highlighted the wealth of experiences that visitors to the United Kingdom can have at any time of the day. We sent ten bloggers to all corners of the UK to capture their 24-hour experiences on video, resulting in 32 videos, one each for every hour of the day and other promotional videos. The campaign took off on Facebook and was met with great enthusiasm by travellers around the world!

We need your vote!

We’re honoured by this incredible recognition and we hope to take it a step further by winning this award! This award would mean the world to us but we’ll need your help. Please vote for 24 Hours in the UK.

24 Hours in the UK: amazing moments every hour of the day!

Designed to highlight the round-the-clock appeal of the United Kingdom, 24 Hours in the UK was a dynamic multi-destination campaign involving ten bloggers and social media influencers from the iambassador network. Trips were held in all corners of the UK in summer/fall 2017 and the campaign’s content was published in January 2018. A team of British and international iambassador influencers were selected for their reach in relevant target markets and video capabilities. Visit Britain and iambassador worked closely together to execute the trips, the content creation and a very impactful launch that stretched over 24 hours.

The influencers filmed their experiences across England, Scotland, Wales and Northern Ireland. These scenes were then edited to create 32 videos that were released during a 24-hour Facebook campaign.

Timed to coincide with so-called “Blue Monday”, supposedly the gloomiest day of the year, 24 Hours in the UK saw the release of hourly videos on the Visit Britain Facebook page throughout 15th January 2018, one hour at a time for a whole day. The aim was to invite both visitors and locals to discover the “mind-boosting” activities available in the UK. The influencers partnered with VisitBritain and partners to share the videos via their social media channels and drive engagement.

Read more about the 24 Hours in the UK campaign.

A BIG THANK YOU to our valued partner VisitBritain for the fantastic collaboration on this innovative project! This was a terrific team effort and we can’t be more proud of the result! We would also like to thank the wonderful bloggers who participated in this campaign: Rob, Nienke, Sam, Audrey, Brendan, Monica, Jana, Heloisa, Paul and Adeline! Your posts, photos and videos have certainly inspired many to travel to the UK in search of those amazing experiences! THANK YOU!